Fashion Achievement of the Year Award 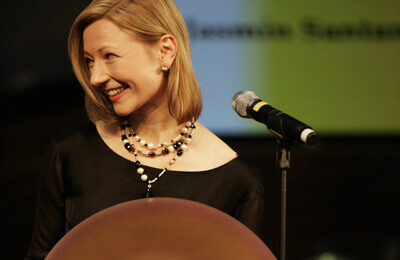 Jasmin Santanen received the Fashion Achievement of the Year Award 2009 at the Finnish Catwalk event for her Spring-Summer 2009 Collection.

Designer Jasmin Santanen received the Finnish Fashion Achievement of the Year Award 2008 at the Finnish Catwalk event for fashion professionals, in recognition of her resolute adherence to her personal vision and her ability to interpret the current phenomena through the medium of fashion.The biggest Finnish fashion event for professionals, the Catwalk also gave a preview of winter 09/10 trends through the collections of leading Finnish and foreign brands. The fact that every stand in the hall was booked indicated the faith in the future of Finnish clothing manufacturers and designers and their willingness to invest in the marketing.

Now upgraded as independent event, The Finnish catwalk drew representatives of the Finnish clothing industry and interesting designer-led companies to meet together at the Wanha Satama, Helsinki. Reserved for professionals only, the Catwalk was a change to check out and buy fashion’s for the forthcoming seasons.

One of the items on the programme for this event viewing fashion from various angles was the announcement of the winner of the Finnish Fashion Achievement of the Year Award for 2008. The recipient of this Award is regarded as enhancing the image of the Finnish textile and clothing industry in an individual manner and as stimulating positive discussion.

“The jury of professionals wanted to give the award to Jasmin Santanen, a designer whose collections have long been attracting interest. Trained in Paris, she has won international acclaim, and during the past year she has also been much in the news in Finland” said Ms. Satu Mehtälä, Chairman of the jury in reporting the reasons for the Jury’s choice.

The jury saw in Jasmin Santanen a fashion train blazer who sensitively interprets current phenomena and has a knack of picking out elements of them that interest the consumer. Her individual approach to design speaks to consumers more profoundly than trendy fashions. Jasmin’s merits also include the consistent form language of her successful collections and her good command of materials and patterning. Her garments were praised as being ecological do to their quality materials and classical elements. A designer who is constantly renewing, Jasmin has succeeded in combining features of a luxury brand with everyday clothing. Last year the Award went to Seppälä’s Supermodel of your own Life campaign.

Finnish fashion industry has faith in the future

The choice of Jasmin Santanen as the Winner of Fashion Award Achievement of the Year Award for 2008 will encourage other finnish fashion makers to stick firmly to their personal vision and to have confidence in themselves. The Finnish Fashion industry and designers all the potential for international success.